President Trump has proposed to eliminate payroll taxes that fund Social Security and Medicare through the end of the year. ITEP estimates that this would cost $843 billion and 65 percent of the benefits would go to the richest 20 percent of taxpayers, as illustrated in the table below. 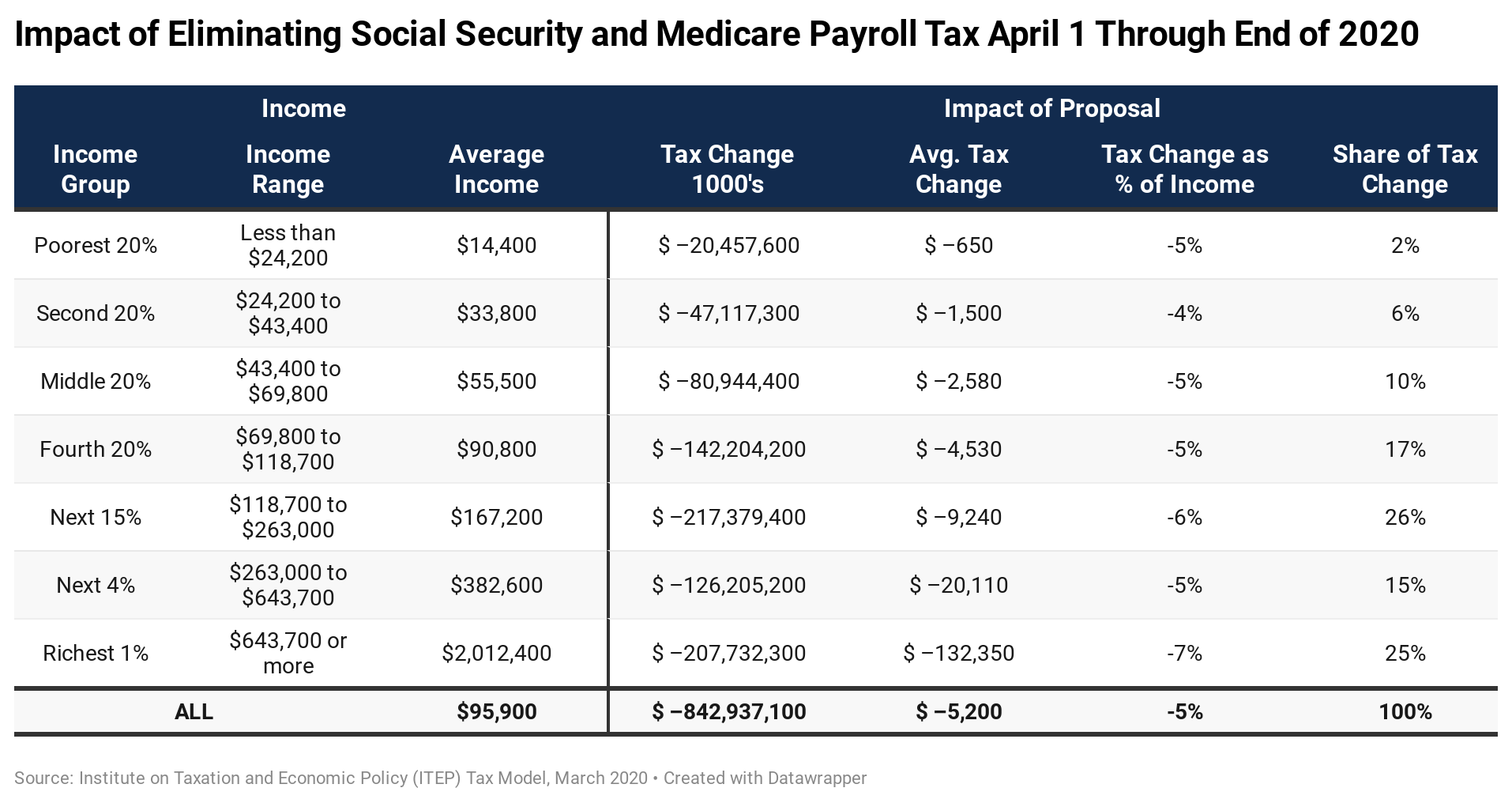 Half of these taxes are paid by employees and the other half by employers. The table below illustrates the different ways this proposal would affect revenue.

Employees would benefit directly from elimination of the employee side of the Social Security tax and Medicare tax, although the benefits would not be well targeted to those who need help the most.

Eliminating the employer side of these taxes would provide a windfall to corporations and other businesses. Because this proposal is a temporary (presumably one-year) measure, there is no reason to believe that employers would pass the benefits to workers. We, therefore, assume that the benefits of eliminating employer’s payroll taxes would be distributed the same as income from business assets (capital gains, dividends, business profits, etc.). 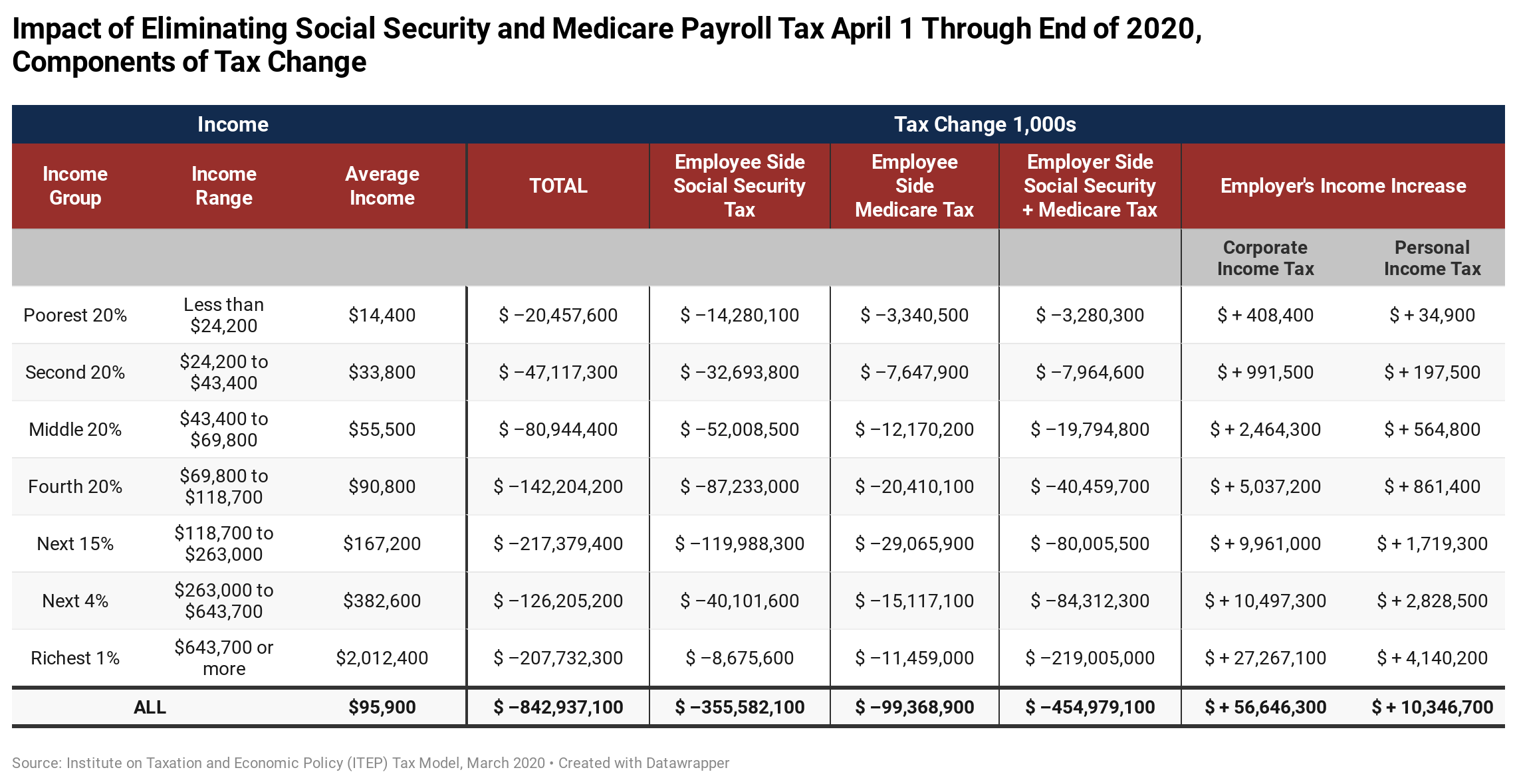 The president’s proposal would temporarily repeal payroll taxes that fund Social Security and Medicare. The Social Security tax is 12.4 percent of earned income up to a maximum, which is $137,700 for 2020. Employees pay half (6.2 percent) and employers pay the other half.

The Medicare tax, also evenly split between employer and employee, is 2.9 percent of earned income with no maximum.

For most working people, the benefit of eliminating the employee side of the Social Security payroll tax starting on April 1 would be three-fourths of the benefits of eliminating the tax for the entire year. But this is not always the case. The maximum earnings subject to the tax is $137,700. Someone who earns four times that amount ($550,800) in 2020 will have already paid the maximum Social Security taxes in the first quarter before this proposal takes effect and will, therefore, receive no benefit from this part of the proposal. For people with earnings between $137,700 and $550,800, the benefit will be somewhere between 0 percent and 75 percent of a full year elimination of the tax.

While workers nominally only pay half of the payroll tax, most analysts believe that, in the long-run, workers also bear the employer side of the tax in the form of reduced compensation. However, that does not mean that workers would immediately benefit from a cut in the employer side of the tax. In the case of a change that is only effective for a year, it is unlikely that workers would be able to immediately and successfully demand that employers pay them in wages what the employers normally contribute to their employees’ Social Security. A one-year cut in the employer side payroll taxes would, therefore, provide a windfall to corporations and other businesses.

It is not entirely clear how the benefits of eliminating the employer payroll taxes would be allocated to C corporations and pass-through businesses. The Joint Committee on Taxation (JCT) finds that 59.4 percent of net business profits were generated by C corporations in 2014. We assume that the same share of the benefits of eliminating employer side payroll taxes goes to C corporations and is therefore subject to the 21 percent corporate income tax. (Of course, it is very possible that the increased corporate profits would be taxed at a lower effective rate, offsetting less of the cost of the payroll tax cuts and resulting in a more expensive proposal.)

We assume that the other 40.6 percent of the benefits from the employer side payroll tax cut go to pass-through businesses and is therefore subject to personal income taxes paid by the owners of those businesses.