ICYMI: A Brief Summary of Our April Blogs and Reports

From the first comprehensive look at corporate filings under the 2017 tax law to bold policy options from analysts and researchers to dramatically reduce poverty, here’s a summary of reports that ITEP released this month. 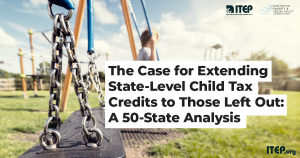 STATE CHILD TAX CREDITS WOULD LIFT 2.1 TO 4.5 MILLION CHILDREN OUT OF POVERTY

States could dramatically reduce child and overall poverty rates by enacting Child Tax Credits. This new 50-state report from ITEP and the Center on Poverty and Social Policy at Columbia University outlines two policy options that states could pursue that would cut child poverty by up to 45 percent.

WHO PAYS TAXES IN AMERICA? 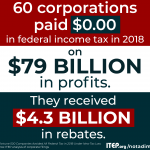 If you haven’t already heard, the 2017 federal tax law did nothing to temper corporate tax avoidance. ITEP’s latest corporate report examined all Fortune 500 company financials that have been filed to date, and found that 60 corporations altogether avoided federal income taxes.
— MATTHEW GARDNER, @gardmaf

THE CASE FOR PROGRESSIVE REVENUE POLICIES (IN CHARTS!)

The 2017 tax law mostly benefited corporations and the wealthy (and will pile trillions onto the national debt). This chart book makes a strong case for why federal lawmakers should seriously consider progressive revenue policies.

This blog highlights why we should be skeptical of Opportunity Zones created by the 2017 tax law, and it outlines how the promise of economic development often means displacing established residents.
— MISHA HILL, @mishamish7, and LORENA ROQUE, @lorenamroque 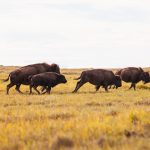 A Montana bill to restructure property tax exemptions on tribal land awaiting federal land trust status died in the State Senate this month. The bill, HB 733, would have made tribal governments the only sovereignties on which Montana levies a tax.
— MISHA HILL, @mishamish7

A proposal re-introduced this month goes a long way toward making tax filing a much more straight-forward process by broadening the IRS’s mandate.
— JESSICA SCHIEDER, @Schieder_ 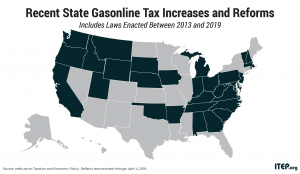 MOST STATES HAVE RAISED GAS TAXES IN RECENT YEARS

Ohio is now the 30th state to raise or reform its gas tax this decade. Increasingly, state lawmakers are deciding that outdated gas taxes need to be raised and reformed to fund infrastructure projects that are vital to their economies.
— CARL DAVIS, @carlpdavis

The Treasury Department and IRS last summer proposed regulations that would make it more difficult for taxpayers to avoid the $10,000 cap on deductions for state and local taxes (SALT). This blog recaps the finer points ITEP will be watching for when the regulations become public.
— CARL DAVIS, @carlpdavis