Tennessee Gov. Bill Haslam’s proposal (dubbed the IMPROVE Act) to raise the state’s gas tax while cutting three other taxes would essentially be a tax cut for the state’s wealthiest residents and a tax increase for the lowest-income Tennesseans.

While the gas tax is badly in need of an update to fund maintenance and investment in the state’s roads and bridges, slashing other taxes by an equivalent amount would essentially plug the hole in transportation funding with money devoted to other vital needs like K-12 schools, higher education, and public safety. And because the gas tax increase predominantly impacts lower-income Tennesseans and many of the tax cuts are tilted in favor of the highest-income Tennesseans, the net effect of the proposal would be a shift in responsibility for funding state investments away from high-income individuals and onto low- and middle-income families (Figure 1). 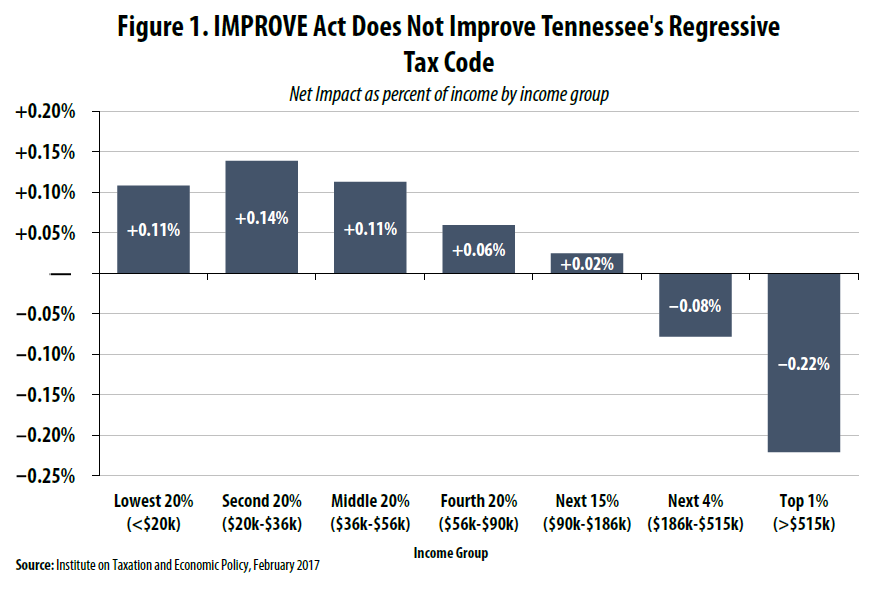 Raising the gas tax in Tennessee is long overdue and gas taxes are widely regarded as an appropriate means for funding transportation infrastructure because they are paid by the people who use that infrastructure the most. Importantly, this includes visitors passing through Tennessee as well as businesses that may not be headquartered in Tennessee but ship goods into, out of, or within the state.

However, increasing the gas tax has a bigger effect on low- and middle-income family budgets than it does on those with higher incomes. While it is desirable to seek ways to offset the gas tax increase for those families least able to afford the tax, lawmakers should seek to do so without sacrificing revenues needed to fund other public services. The IMPROVE Act fails mightily in this regard, slashing other taxes to such an extent that the state will end up with no more revenue than it has today, and focusing many of those tax cuts on wealthy individuals and corporations.

As shown in Figure 2, only the token grocery tax reduction (from the current 5 percent rate to 4.5 percent) is targeted to the Tennessee families most affected by the gas tax increase. On the other hand, the Hall Tax cut for investors (from the current 5 percent rate to 2 percent over two years) and corporate tax cut (allowing businesses to choose “single sales factor” apportionment) predominantly benefit the state’s wealthiest residents. The Hall Tax is slated for full elimination in 2022. 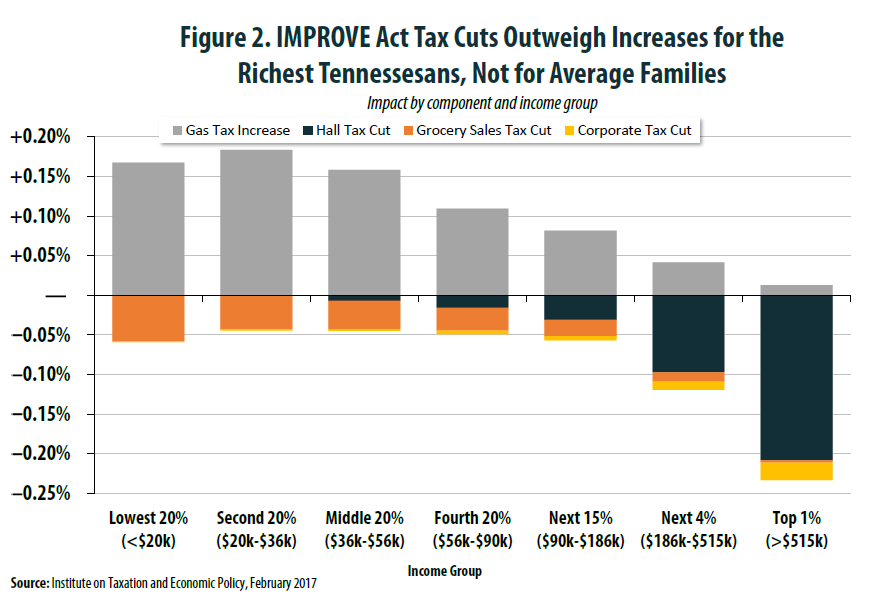