This month, Alaska legislators regroup in yet another special session where they will consider legislation to address a yawning budget gap created by declining oil tax and royalty revenues. Through the use of his veto pen, Gov. Bill Walker has partially addressed the gap with cuts to state spending and a sharp reduction in tax breaks for the oil industry. [1] The governor also opted to cap the state’s Permanent Fund dividend—a flat dollar payment that most Alaskans receive each year—at $1,000 per person. This represents a reduction of more than 50 percent relative to last year’s dividend of $2,072.

In the New Sustainable Alaska Plan that he released late last year, however, the governor also made clear that his preferred solution would include more significant revenue increases to accompany these large cuts in spending. [2] Most notably, that plan would bring Alaska’s tax structure into somewhat closer alignment with most other states by reinstituting a personal income tax for the first time in 35 years. Currently, Alaska is one of just nine states that lacks a broad-based tax on personal income.

With legislative negotiations having lasted long past their scheduled completion date, Gov. Walker recently decided to broaden the scope of revenue options under consideration to include the enactment of a statewide sales tax. [3] This decision leaves lawmakers with a stark choice: while either an income tax or sales tax could make a meaningful contribution toward closing Alaska’s budget shortfall, their respective impacts on Alaskans and the sustainability of the state’s tax structure would be very different.

Simply put, a personal income tax is preferable to a general sales tax in many respects. Here are five key facts that Alaskans and their elected officials should keep in mind when comparing the merits of these two policy options:

1.       Most Alaskans would pay less under a personal income tax than a sales tax. 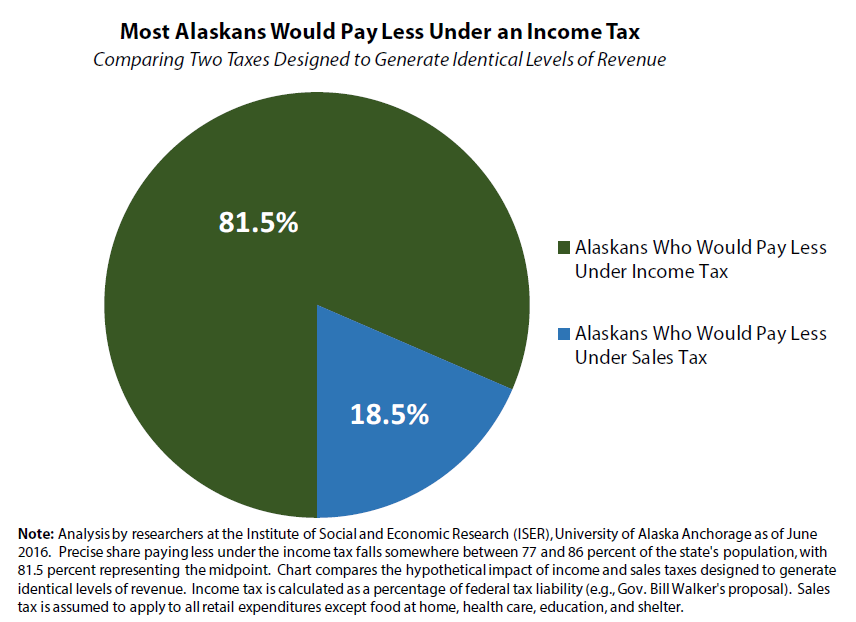 For any given amount of revenue that lawmakers may try to raise, four out of every five Alaska residents would pay less under an income tax, such as Gov. Walker’s, than they would under a general sales tax. [4] This is true even if steps are taken to mitigate the regressivity of the sales tax by exempting food and shelter.

Since progressive income taxes are capable of collecting a significant share of revenue from those few households with very large incomes, the contribution needed from the rest of Alaska households is comparatively lower.

According to researchers at the University of Alaska Anchorage’s Institute of Social and Economic Research (ISER), the top 20 percent of earners are the only group that would fare better under a sales tax than under an income tax of equal size. In the context of Gov. Walker’s specific proposals—which include a sales tax designed to raise $500 million alongside an income tax that would raise just $200 million—the share of Alaskans better off under the sales tax would be even smaller.

In a recent report, ITEP found that many of the policy options under consideration in Alaska—such as increases in taxes on gasoline, alcohol, and tobacco, or a cap on the Permanent Fund dividend of the type recently implemented by Gov. Walker—would disproportionately impact low- and moderate-income residents. [5] In that report, ITEP concluded that an equitable solution to filling Alaska’s budget gap is not possible unless a personal income tax is included in the overall package of reforms. The progressivity of a personal income tax offers an important counterbalance to the regressivity of these other policy changes.

By contrast, a general sales tax would actually exacerbate the regressivity of any fiscal reform package. Since families of modest means spend most or all of what they earn while high-income families are able to save and invest a sizeable share of their earnings, every statewide sales tax in existence takes a larger share of income from low-income families than from the wealthy. Researchers with the Alaska State Legislative Finance Division and ISER both confirm that a statewide Alaska sales tax would be no exception. [6]

As in the rest of the U.S., Alaska has seen its level of income inequality increase over the years. According to a recent report from the Economic Policy Institute, the inflation-adjusted incomes earned by the bottom 99 percent of Alaskans fell by 18 percent between 1979 and 2007. Over that same period, income for the top 1 percent shot up by 119 percent even after adjusting for inflation.

Alaska is one of just four states where only the top 1 percent experienced rising incomes from 1979 to the start of the Great Recession. As a result of this extended period of lopsided income growth, the share of income held by the top 1 percent of Alaskans is near historic highs. [8]

If past trends are an indication of where Alaska is headed, a personal income tax will be a far more effective and sustainable source of revenue than a sales tax in the long-term. While sales taxes tend to fall disproportionately on low- and moderate-income households that are seeing little change in their incomes, personal income taxes can be fine-tuned to raise significant revenues from the high-income households enjoying the most income growth.

In other words, if incomes are growing fastest at the top, revenue growth will be more robust under a tax capable of raising revenue from top earners. A personal income tax fits this description much better than a general sales tax.

According to researchers at the Alaska Department of Labor and Workforce Development, a high cost of living is “one of the most persistent economic challenges in rural Alaska.” [9] Unfortunately, that problem could be exacerbated if lawmakers opt to levy a sales tax in lieu of a personal income tax.

Since the amount of sales tax paid depends on the price of the goods being purchased, rural Alaskans who face higher prices than families in urban areas would ultimately have to shoulder a disproportionate share of any statewide sales tax. In the city of Nome, for example, residents pay 27 percent more than Anchorage-dwellers for clothing, 37 percent more for personal care items, and 66 percent more for home furnishings and appliances. [10] This disparity exists across Alaska’s rural communities and would only widen if the prices of these products are raised via the imposition of a statewide sales tax.

A common refrain among opponents of personal income taxes is that they discourage affluent individuals from living in a state and are generally damaging to economic growth. These claims do not have merit.

In May 2016, the migration effects of state income tax policies were examined in detail by researchers at Stanford University and officials at the U.S. Treasury Department. Using a new dataset encompassing every tax return earning at least $1 million between 1999 and 2011, the researchers found that Alaska, and most other states without an income tax, “do not draw millionaires from high-tax states.” [11]

Moreover, the evidence from states that have recently scaled back their personal income taxes does not indicate that those reductions triggered meaningful economic growth. In an analysis looking at personal income tax cuts as far back as the early 1990s, the Center on Budget and Policy Priorities (CBPP) consistently found that tax cutting states did not see strong employment growth in the years to follow. [12]

There are good intuitive reasons for these findings. In most states, the revenues generated by personal income taxes are vital to ensuring that education, workforce training, infrastructure, and other public services are adequately funded. If choosing to reduce an income tax (or not to levy one at all, in Alaska’s case) requires cutbacks in these economically vital services, such a course of action can actually be damaging to the economy.

Alaska currently faces a budget gap so large that in order to achieve true long-term balance, the enactment of a broad-based income tax, or general sales tax, will likely be required. But while a personal income tax could help to counter some of the regressivity of other policy options on the table, the enactment of a statewide sales tax would fall more heavily on low- and moderate-income households. Moreover, a personal income tax is also likely to generate a more sustainable level of revenue in the long-term as compared to a general sales tax.

Finally, a large majority (nearly 82 percent) of Alaskans could expect to pay less under a progressive income tax than they would under a sales tax designed to generate an identical level of revenue. This is particularly the case for individuals living in rural Alaska who would face above-average sales tax bills on the more highly priced goods they buy every day.

[4] Estimate provided June 24, 2016 by researchers at the Institute of Social and Economic Research (ISER), University of Alaska Anchorage. See note accompanying chart for a more detailed description of this figure. Note also that while the sales tax proposed in HB5004 is slightly different than the tax modeled by ISER researchers, the broad outlines are similar and include exemptions for groceries, health care, and shelter.

[7] Who Pays? A Distributional Analysis of the Tax Systems in All 50 States, Institute on Taxation and Economic Policy. January 2015. https://itep.org/whopays/

[8] Income Inequality in the U.S. by State, Metropolitan Area, and County. June 16, 2016. http://www.epi.org/publication/income-inequality-in-the-us/