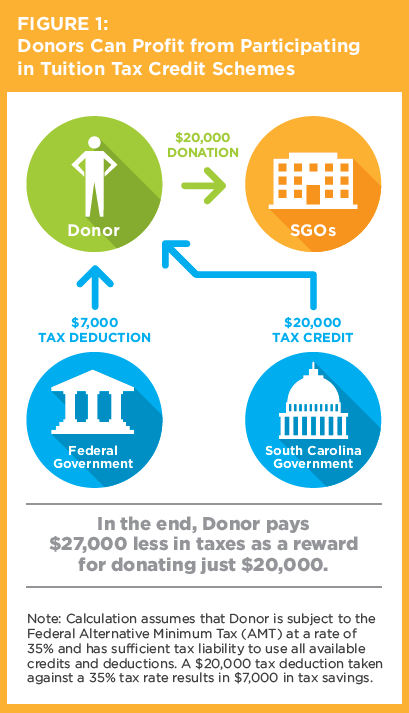 A new report by the Institute on Taxation and Economic Policy (ITEP) and AASA, the School Superintendents Association, details how tax subsidies that funnel money toward private schools are being used as profitable tax shelters by high-income taxpayers. By exploiting interactions between federal and state tax law, high-income taxpayers in nine states are currently able to turn a profit when making so-called donations  to private school voucher organizations. The report also explains how legislation pending in Congress called the Educational Opportunities Act (EOA) would expand these profitable tax shelters to investors and corporations nationwide.

The core feature of these tax shelters are credits that offer supersized incentives to donate to organizations that distribute private school vouchers. When taxpayers donate to most charities, such as food pantries or veterans groups, they typically receive a charitable tax deduction that somewhat reduces the out-of-pocket cost of their donation. Private school proponents have decided that their cause is worthy of a far more generous subsidy, however, and have successfully pushed for the enactment of state tax credits that wipe out up to 100 percent of the cost of donating to private school voucher organizations. When these lucrative state tax credits are combined with federal charitable tax deductions (and sometimes state deductions as well), some high-income taxpayers are finding that the tax cuts they receive are larger than their actual donations (see Figure 1). Tax accountants and private schools have seized on this tax shelter and turned it into a marketing opportunity, advising potential donors that: “You can make money by donating!”

As things stand today, this tax loophole is only available to taxpayers in nine of the seventeen states with private school voucher tax credits. But the Educational Opportunities Act (EOA) introduced by Sen. Marco Rubio (FL) and Rep. Todd Rokita (IN) would open up entirely new profit-making schemes to investors and corporations nationwide.

The EOA would offer a 100 percent tax credit of up to $4,500 for individuals or $100,000 for corporations donating to fund private school vouchers. Under this system, investors choosing to donate stock (or other property) rather than cash to voucher organizations would find that doing so would be more lucrative than if they had simply sold the stock and kept the money for themselves. This is because rather than receiving (taxable) capital gains income from a buyer of the stock, the investor would be paid in (tax-free) federal tax credits.

Wealth managers and tax accountants would be foolish not to advise their clients to take advantage of these handouts. Even families with no particular attachment to private schools would find it to be in their own financial best interest to begin donating to those schools. The result could be an explosion in funding for private schools at the expense of the public coffers and everything they fund including public education.