The major provisions for cash payments and tax changes in the House Democrats’ Health and Economic Recovery Omnibus Emergency Solutions (HEROES) Act would provide nearly $600 billion to individuals and households and average benefits of more than $3,000 to families in all but the highest income levels.

While the HEROES Act includes important aid to state and local governments and other measures, this analysis focuses on cash payments and the most significant tax provisions in the bill. The bill also includes substantial spending, much of which is well targeted toward those who’ve lost work and to safety net, education, health and other categories that are helpful to people across the earnings spectrum and are particularly important for struggling families.

The overall impact of the provisions is likely to be more progressive than is shown here because this analysis does not take into account the recent deterioration in the economy, including lost jobs and reduced incomes, which makes more people eligible for the benefits that target low- and middle-income households.[1]

This analysis is limited to the bill’s cash payments and its most significant tax provisions for individuals and households. Below is a description of parts of the bill included in this analysis.

Among these provisions, the centerpiece of the HEROES Act is a new one-time payment of $1,200 ($2,400 for married couples) plus another $1,200 for each of up to three dependents. This means that a family of five or more could receive up to $6,000. The payment is phased out at a rate of 5 cents for each dollar of income in excess of $75,000 for single taxpayers, $112,500 for single parents, and $150,000 for married couples. (These are the same income eligibility rules in place for the cash payment under the CARES Act.)[2]

Immigrants working in the United States who file taxes using an Individual Taxpayer Identification Number (ITIN) would be eligible for this payment, along with all members of their households, unlike the payment provided under the CARES Act. 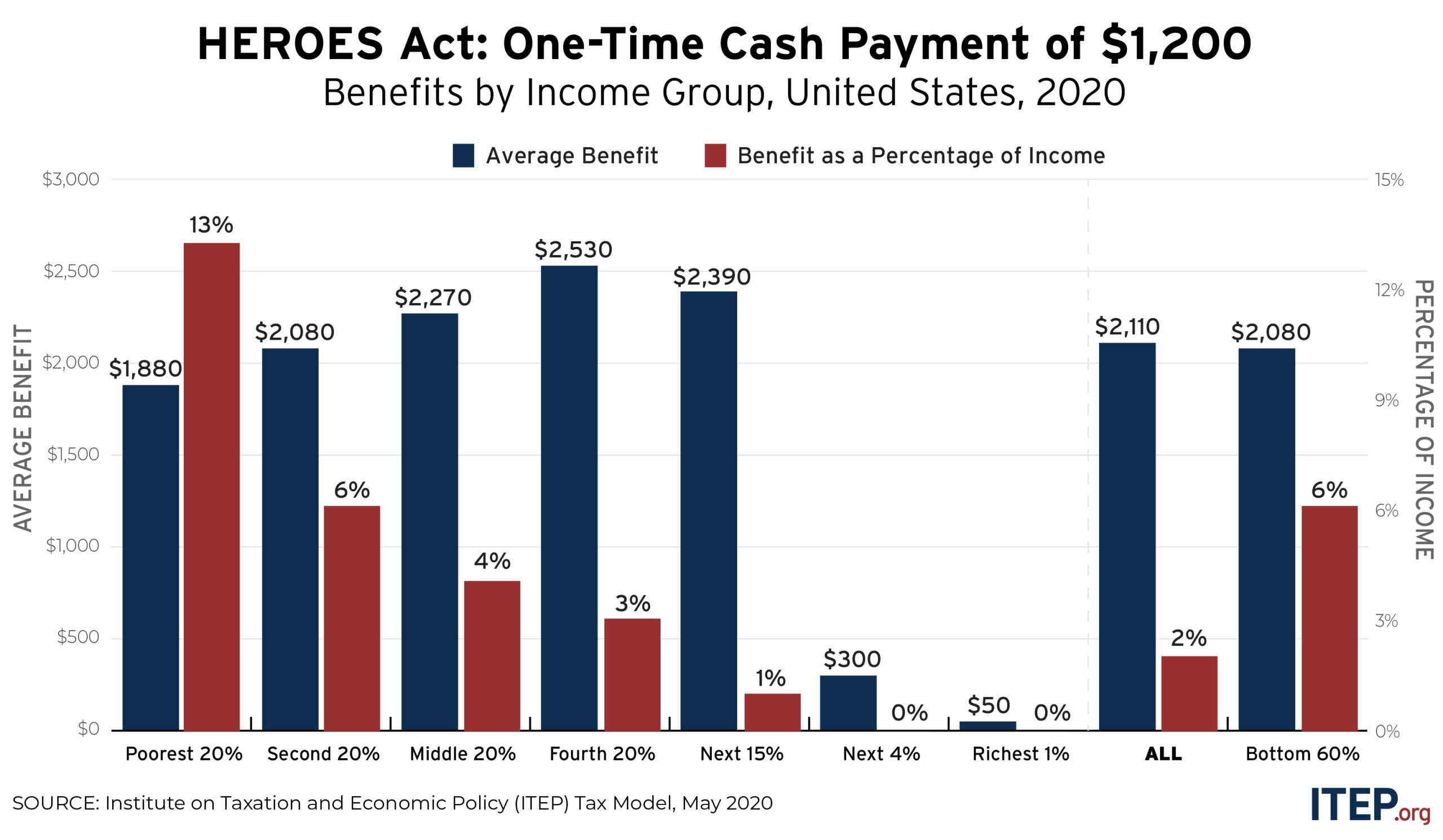 Expansion of Existing Payment Under the CARES Act

The HEROES Act also expands the CARES Act payment by making it available to ITIN filers and their family members.

The bill also eliminates a provision that makes individuals ineligible for the EITC if they have a small amount of investment income.

And, it adds flexibility to the EITC by allowing taxpayers to use their 2019 or 2020 earnings to calculate the credit (ITEP did not model this change).

The HEROES Act would also temporarily increase the Child Tax Credit (CTC) from $2,000 per child to $3,000 for each child age 6 and older and to $3,600 for each child younger than age 6. The HEROES Act would also make the CTC fully refundable, eliminating both the dollar cap on the refundable portion and the requirement to have at least $2,500 in earnings.  Seventeen-year-olds would also be eligible for the credit (but ITEP did not model this change).

The proposed improvements to the EITC are well-targeted to help working people, as is making the CTC fully refundable and removing the earnings requirement. Increasing the credit amount is a boost to low- and middle-income families, but to a degree also helps the well-off because, under current law, the CTC does not begin to phase out until families reach very high income levels ($400,000 for families headed by married couples).

Suspension of $10,000 Cap on Deduction for State and Local Taxes (SALT)

The HEROES Act proposes a two-year suspension of the Trump tax law’s $10,000 cap on deductions for state and local taxes (SALT). This would primarily benefit higher-income households.

Drafters of the Trump tax law could have offset the cost of their tax cuts by eliminating any number of special breaks and loopholes, but they chose to focus on a deduction used most by those living in higher-tax states, which are often perceived as “blue states.” This analysis estimates that 62 percent of the benefits from suspending the SALT cap in 2020 will go to the richest 1 percent of taxpayers. 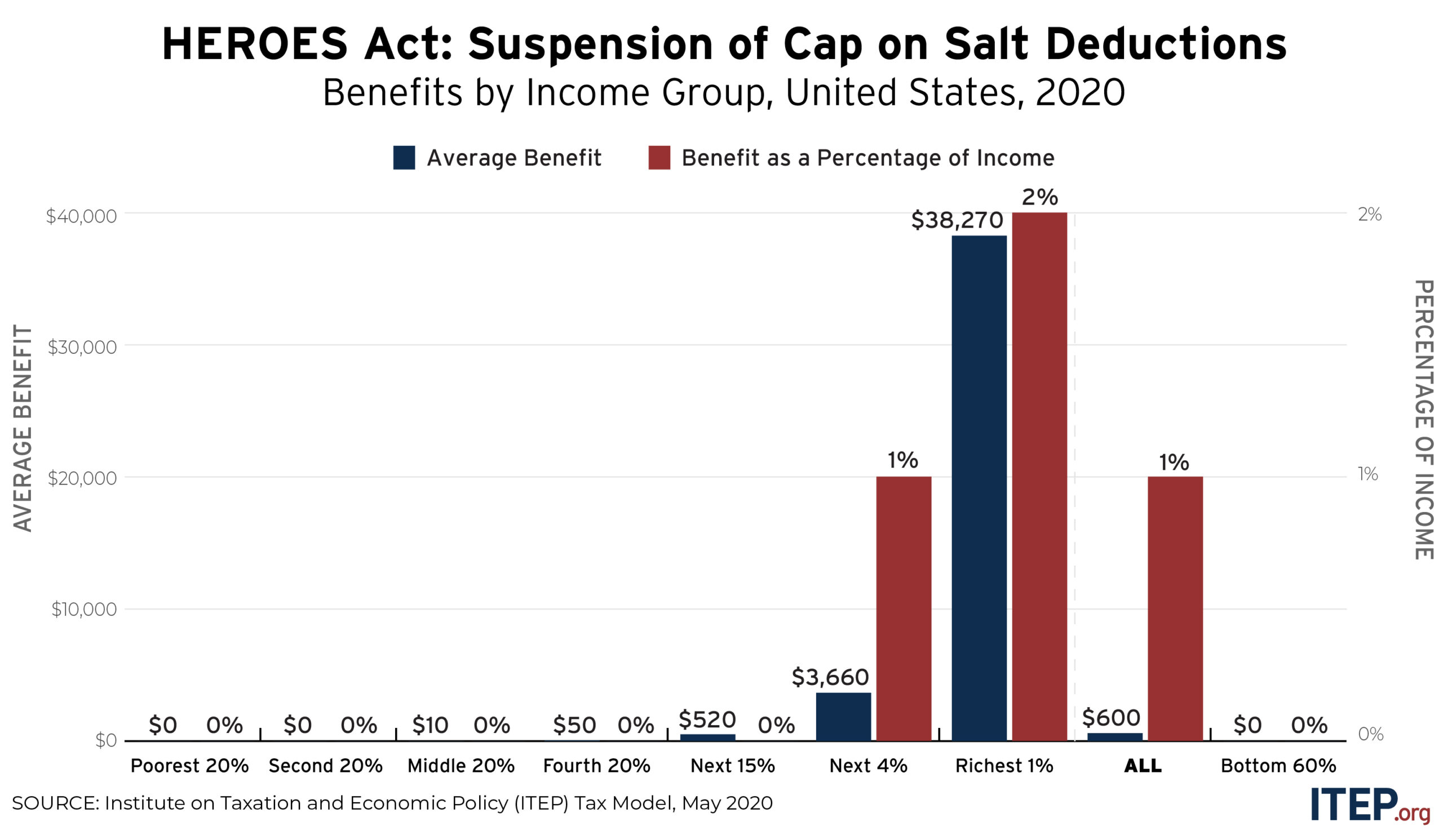 [1] Deterioration of the economic climate would make the impact of this package more progressive, but its effect on the cost of these provisions is less clear. For example, reduced incomes could lead to more childless households receiving the EITC and benefiting from its expansion, but could also reduce the amount of state and local taxes (SALT) paid and therefore reduce the cost of suspending the cap on SALT deductions.

[2] This analysis assumes that eligibility for the payment is based on 2019 income because that is likely to be true in most cases. However, the bill would also allow eligibility based on 2018 income or 2020 income in some cases, which could lead to greater cost than is shown here.