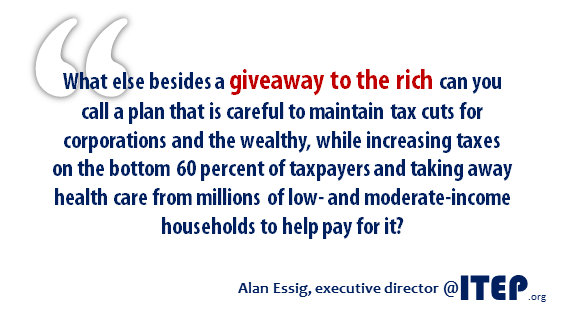 ITEP has analyzed each of the tax proposals advanced by the House and Senate in recent weeks. While some details have changed, the bottom line is the same: The plans would disproportionately benefit corporations and the wealthy.

ITEP’s latest analysis examined the proposal that passed the Senate Finance Committee on Nov. 16. It found that in 2027, taxpayers in the bottom 60 percent of households on average would face a tax increase, [view chart] and the lowest-income 20 percent of households would face the biggest increase by far, both as a percentage of their income and in real dollars [view chart].

The Senate plan becomes this regressive by 2027 because it would roll back tax cuts for individuals while maintaining tax cuts for corporations [view chart]. In fact, while “only” 10 percent of taxpayers would face a tax increase in 2019, by 2027 nearly one in three taxpayers would be subject to a tax hike. It’s worth noting that the percent of taxpayers that would face a hike under the Senate plan increases for all income groups between 2019 and 2027—except the top 5 percent.

Two more critical points about the Senate plan worth noting

Taxpayers in 19 states collectively would pay more to the federal government in 2027 than they would pay if Congress did nothing. These states are economically and politically diverse [view chart]. Finally, in the later years of the plan, foreign investors collectively would net a larger tax break than U.S. taxpayers by a ratio of nearly three to one [view chart].  Read ITEP’s 50-state analysis of the Senate Finance Committee-passed Tax Cuts and Jobs Act.

Introduced on Nov. 2, the House tax plan would raise taxes on some Americans and cut taxes on others [view distributional tables for 2018 and 2027]. In 2018, the top 1 percent would receive 31 percent of tax cuts in the House plan [view chart]. By 2027 this group would receive nearly half of the tax cuts. To view ITEP’s 50-state analysis of the House tax plan, go to: https://itep.org/housetaxplan/

An ITEP analysis revealed that four states would see their residents pay more in aggregate federal personal income taxes under the House’s Tax Cuts and Jobs Act. While some individual taxpayers in every state would face a tax increase, only California, New York, Maryland, and New Jersey would see such large increases that their residents’ overall personal income tax payments rise when compared to current law. Read more

About that property tax deduction

Many households would pay more in federal tax if Congress enacts the House bill, in part because it would slash the amount of state and local taxes taxpayers deduct by 88 percent. The hardest hit states include Maryland, California, New Jersey, Connecticut, New York, Utah, Virginia, Georgia, Hawaii, Massachusetts, Oregon and Illinois. Read more

Seriously, though, why are we debating tax cuts that mostly benefit the rich?

Average income for the lowest-income 40 percent of households is less today than it was in 1999. For the middle 20 percent, average income has barely budged. For the richest quintile and the top 5 percent in particular, the story has been quite different: Their incomes have soared [view chart] or read more.

Despite the revelations from the Paradise Papers revealing the galling maneuvers that multinationals use to avoid paying their fair share in taxes, the House GOP tax plan would make the nation’s offshore tax system worse by giving companies a huge windfall on their past offshore profits and exempting their future profits from virtually any tax at all. Read more