Targeted Relief and the American Rescue Plan in Five Charts

After a month of negotiations, Congress will send the American Rescue Plan Act to the Oval Office for President Biden’s signature. The comprehensive bill includes critical components to address job loss, poverty and a weak economy.

The American Rescue Plan Act is unique in that it employs the tax code to deliver relief to those struggling most. The five charts below provide a glimpse of how the plan helps families across the income spectrum and also targets economic relief to low- and moderate-income families in the form of cash payments and expansions to the Child Tax Credit and Earned Income Tax Credit.

Combined, cash payments and tax credit expansions are particularly targeted—as a share of income—toward households who earn $65,000 or less annually. Families in the poorest 20 percent of households—$21,300 or less annual income—receive an average income boost of one-third. On average, these provisions will send $3,460 to households in the bottom 80 percent, giving a more dramatic boost to lower-income households as a share of income. For families with children, the payment would be much larger than the averages depicted here.

Cash payments reach more than 4 in 5 adults. A provision for $1,400 cash payments to individuals has widespread public support. On average, households in the bottom 60 percent would receive $2,460 in cash payments. The dollar amounts going to households in different quintiles are quite similar, but the impact is particularly meaningful for lower- and middle-income families. As a share of income, the bottom 60 percent receive an income boost three times larger than the overall average impact for all households.

Expanding the Child Tax Credit will dramatically reduce child poverty and begin to address racial inequities in the tax code. The current CTC provides no benefit or just a partial benefit to more than one-third of all children and nearly half of Black and Hispanic children. Due to longstanding inequities that disadvantage communities of color, Black and brown families are overrepresented in lower-income groups. Enacting full refundability of the credit will reach those children left behind and provide much-needed relief to parents and caregivers in the lowest-income 20 percent of households, who typically do not earn enough to qualify for the full credit in its current form.

Provisions in the bill affect different families in various ways, but they consistently target low-, moderate- and middle-income households more than those at the top when considered as a share of income. They also direct much more help to households with children. A recent report from the Center for American Progress shows that a single parent earning minimum wage in a full-time position with two young children would receive $9,525 this year in direct economic relief. For those without children in the home, the American Rescue Plan Act nearly triples the maximum amount of the Earned Income Tax Credit (EITC) and expands age limits to reach more than 21 million adults. A single person working full-time in a minimum-wage position would receive a 15% income boost—or roughly $2,300—from the cash payments and EITC expansion combined. 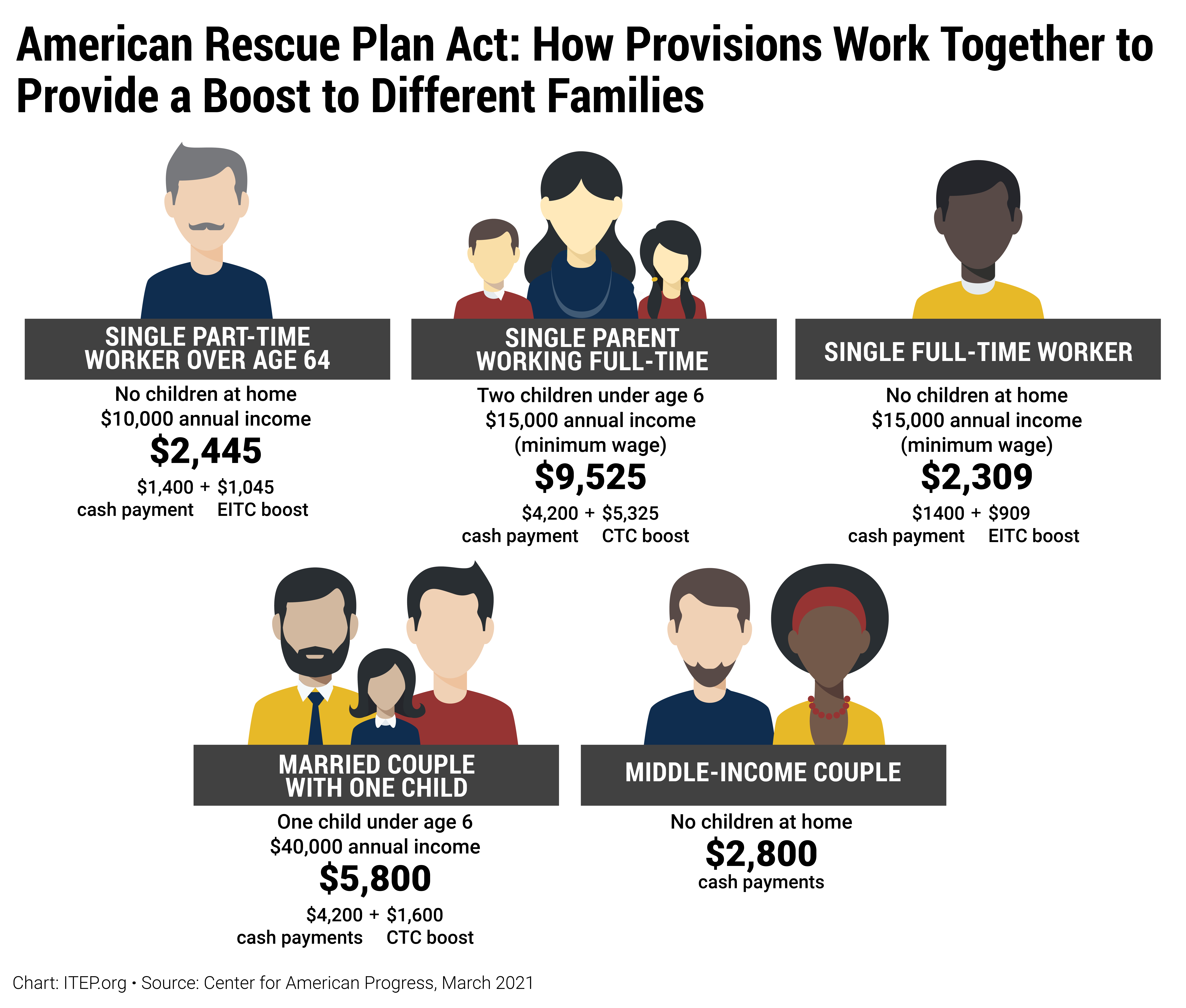 The numbers and scenarios represented here exclude millions of immigrants who pay taxes using Individual Taxpayer Identification Numbers (ITINs) and are disproportionately represented in frontline jobs. This glaring oversight is receiving attention in some states, where lawmakers and advocates are building more inclusive state-level relief packages,

The American Rescue Plan Act stands in stark contrast to years of tax policy for the wealthy. An ITEP report found that from 2001 to 2018, the richest 20 percent received nearly two-thirds of benefits from federal tax legislation; the top 1 percent received a staggering 22 percent of benefits. Previous “tax cut” packages comparatively did little for low- and middle-income families and reduced federal revenue by $5 trillion. It is clear in the chart below that the benefits of tax changes in the American Rescue Plan Act are more evenly distributed than tax policy from the Bush, Obama and Trump eras combined.

For decades, lawmakers have used the tax code to reward wealth over work. This history of regressive, top-heavy tax cuts fueled 40 years of ever-widening wealth and income inequality, making the pandemic-induced downturn the most unequal recession in modern history. For hundreds of millions of Americans impacted by the past year’s health and economic crises, the American Rescue Plan Act is providing economic security at a time they need it most. For progressive lawmakers and advocates, it is a welcome down payment on the road to recovery and a hopeful first step on the path to more balanced, equitable policymaking.