A new ITEP 50-state analysis of the Trump-GOP tax framework sheds more light on why, when pressed, White House officials are evasive about who benefits from their proposal. It’s touted as plan for the middle-class but delivers a boon to the wealthy, throws a comparative pittance to everyone else and even includes a dose of tax increases for some middle- and upper-middle-income taxpayers. The data belie the rhetoric.

We are well aware that anti-tax advocates will cry foul and claim the rich deserve a bigger tax cut because they pay more in taxes (as they should since they earn far more than average). But no matter how you look at the data, the rich are the clear winners. They get a bigger tax cut not just in raw dollars, but also as a share of their income. On average, the richest 1 percent would receive a tax cut equal to 4.3 percent of their income. No other group would enjoy such a bonanza. Tax cuts for the bottom 99 percent of taxpayers would amount to less than 1 percent of income. 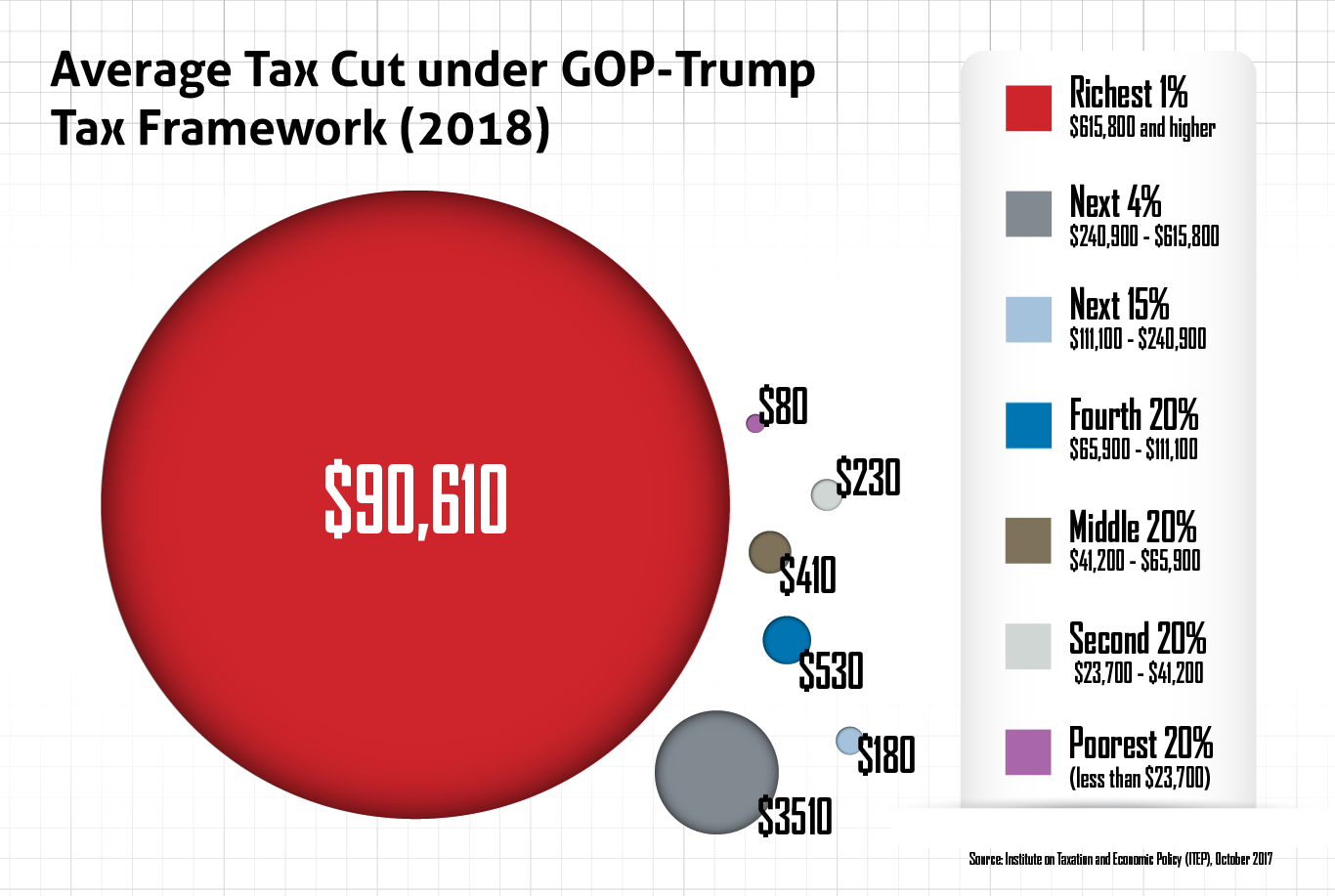 Further, ITEP’s analysis reveals one in six households would face a tax increase under this plan. Those earning between $111,100 and $240,900 are most likely to see a tax hike, although the analysis found that taxes would increase for some taxpayers in all income groups. Quite literally, this plan would worsen income inequality by giving a significant income boost to the very richest, lowering the after-tax incomes of many middle- and upper-middle-income families and simultaneously starving the federal government of resources necessary to fund basic programs and services.

After taking into account the impact of lower tax collections on the federal budget, the rich are this plan’s only net winners.

But this fact hasn’t stopped tax cut advocates from trying to convince us otherwise. During a press conference last week, Gary Cohn continued to insist the plan would benefit the middle class. He said a typical family with two kids earning $100,000 could, “renovate their kitchen, they can buy a new car, they can take their family on vacation, they can increase their lifestyle.”

Social media mavens and news pages quickly derided the former Goldman Sachs executive for being out of touch with ordinary Americans. Consumers cannot purchase a new car, let alone a decent used car for $1,000, and they certainly cannot remodel an entire kitchen for that sum. This is not breaking news.

Cohn’s words as well as previous statements made by GOP leaders and administration officials betray either a fundamental or deliberate misunderstanding of the day-to-day lives of ordinary working people.

The idea that the plan’s comparatively meager tax cuts for the middle class would, in any way, allow them to dramatically change their lives is preposterous. Median household income is $59,000 per year. This means half the nation’s households earn more and half earn less. Savings rates, whether for retirement or just a rainy day are low because a significant number of working people need every cent they earn just to put a roof over their head, gas in their car and food on the table–not to mention clothing their children and paying for school supplies. An extra $1,000 per year amounts to about $83 a month, but most families wouldn’t even receive anything close to this amount from Trump’s proposed tax changes.  In any case, for some working families, that sum would simply mean having to rob Peter a little bit less each month to pay Paul.

And yet the GOP continues to claim its priority is boosting the after-tax incomes of the middle class. It is fair to have a policy debate about whether this is a worthwhile goal, especially at a time when working families are financially standing still. But this is not intention of their plan. The nominal tax cuts that add up to less than 1 percent of income for bottom 99 percent of taxpayers are a smokescreen meant to distract from much larger tax breaks for the wealthy and corporations.

Much like the failed health bill, the tax proposals now under discussion in Congress would shower tax cuts on the rich and bring about dramatic cuts in public services. This debate over so-called tax “reform” should meet the same fate as the GOP’s so-called health “reform.”