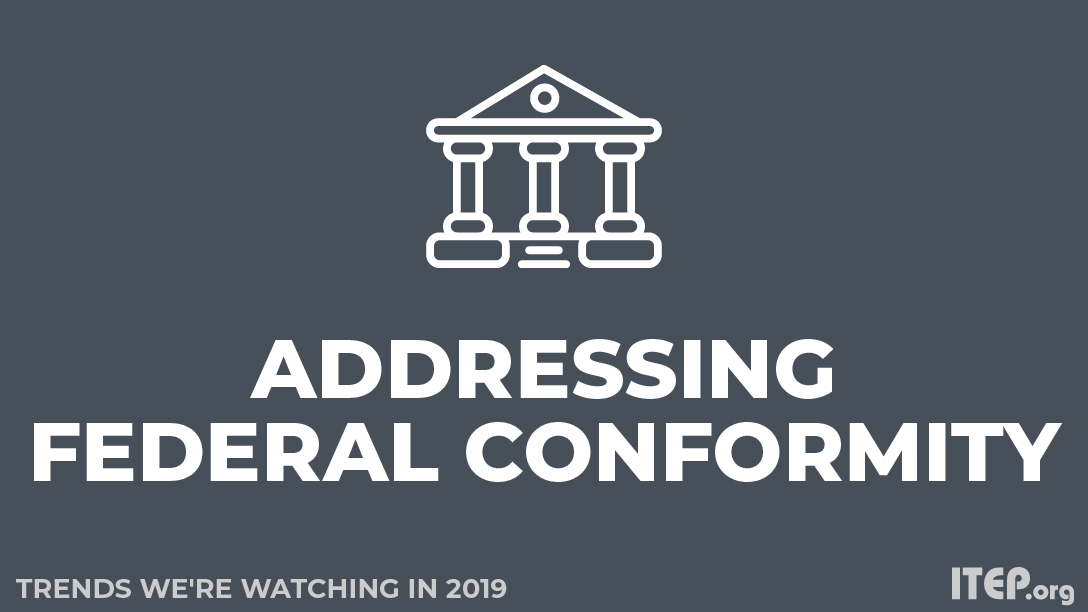 This is part four of a seven-part series on state trends we’re watching in 2019.

In our last update on state responses to the federal tax cut (Tax Cuts and Jobs Act, or TCJA), we noted that several states were waiting until 2019 to make their final decisions, giving them additional time to (hopefully) respond in ways that improve their fiscal situations and upside-down tax codes. The TCJA is affecting the 2018 federal taxes people are filing now, in some cases adding urgency and/or confusion to these debates.

ARIZONA residents, for example, have been issued tax forms that reflect Gov. Doug Ducey’s preferred path–full conformity to the TCJA and acceptance of the $150 million revenue bump that entails, which he (and we) would like to see placed in the state’s Rainy Day Fund–even though that path is neither reflected in current law nor a guaranteed outcome of this year’s debate. Lawmakers passed a conformity package, in fact, that would significantly alter taxes due this year by conforming to the TCJA’s deductions changes but cutting rates across the board to avoid an overall tax increase. Gov. Ducey recently vetoed that package, leaving the outcome uncertain for now.

In VIRGINIA, tax returns are piling up while the Department of Taxation waits to find out if any changes are enacted that are retroactive to 2018. Although the state could be poised to gain revenue if it maintains its current level of federal conformity, one proposal from the House GOP would turn that into a net revenue loss by changing deduction rules, increasing the standard deduction and decoupling from some TCJA provisions that limited itemized deductions. An alternative proposal would be closer to revenue-neutral and improve progressivity by increasing the standard deduction and adjusting it for inflation, conforming to most of the base-expanding TCJA itemized deductions changes, retaining an important phase-down of itemized deductions for very-high-income households, and slowly making the state EITC fully refundable.

KANSAS legislators face a similar dilemma, deciding whether to change deduction rules to avoid tax increases and how to handle the TCJA’s corporate tax provisions. Meanwhile, lawmakers in CALIFORNIA, MINNESOTA, NEW MEXICO and UTAH are still studying their options as well.