The tax proposals released by the Trump Administration in April would reduce the share of total federal, state and local taxes paid by America’s richest 1 percent while increasing the share paid by all other income groups. This clearly indicates that the tax system would be less progressive under the president’s approach. Although the president’s proposals would cut taxes across the board, tax cuts for lower- and middle-income households would be far smaller, even when measured as a share of household income, than the tax cuts for the rich. 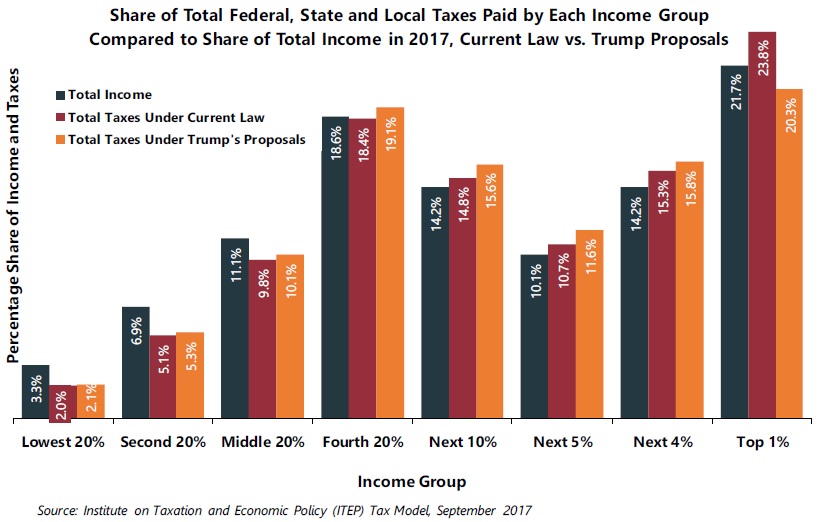 The effective total tax rate (the share of income paid in federal, state and local taxes) would change even more dramatically for the rich, as the graph below illustrates. Under current law, the richest 1 percent, who are projected to have an average income of $1.8 million this year, will pay a total effective tax rate of 34.1 percent, which is at least slightly higher than the rate paid by all other income groups. 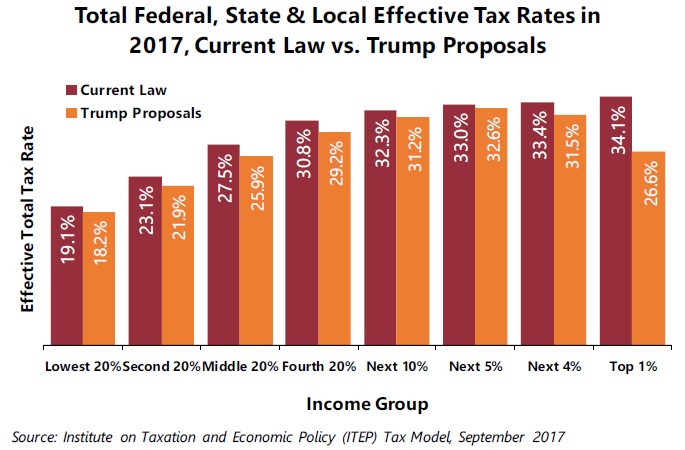 But under Trump’s proposals, the richest 1 percent would pay an effective total tax rate of just 26.6 percent, close to the rate paid by the middle 20 percent of Americans, who will have an average income of just $50,500 this year. The tax code would lose the slight amount of progressivity it has at the top end, where it is most needed.

This analysis also accounts for the indirect effects that the president’s tax proposals would have on state and local taxes. For example, as illustrated in the detailed table below, the effective state and local tax rate for the richest 1 percent would rise very slightly under the president’s proposals. This would happen because some states’ tax rules allow the same breaks that are available at the federal level, and the president’s proposals to eliminate those breaks from the federal tax code would cause them to disappear from those states’ tax codes as well. But as the table illustrates, the impact of this would be relatively small and completely overwhelmed by the reduction in the effective federal tax rate for the richest one percent.