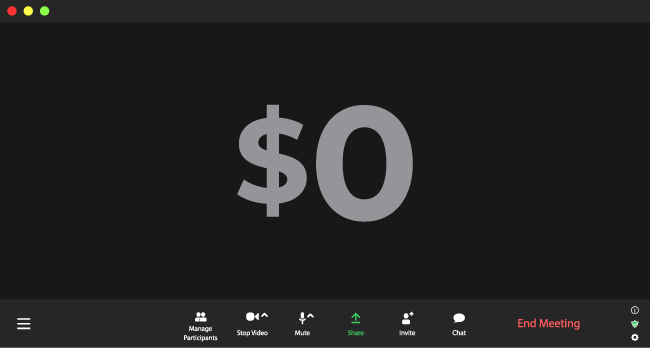 Zoom Video Communications, the company providing a platform used by remote workers and school children across the country during the pandemic, saw its profits increase by more than 4,000 percent last year but paid no federal corporate income tax on those profits.

The company reports that it made $660 million of pre-tax profits for 2020, an exponential increase from its $16 million in pre-tax profits in 2019. The immediate shift to online activity explains the company’s unprecedented income growth. For many, Zoom has become a ubiquitous daily meeting space, both for work, class instruction, family gatherings and evening happy hours.

But why was the company’s income bonanza not matched by at least a token federal tax bill? The main answer appears to be the company’s lavish use of executive stock options. Zoom’s income tax reconciliation says it reduced its worldwide income taxes by $300 million in 2020 using stock-based compensation.

As an ITEP report explains, companies that compensate their leadership with stock options can write off, for tax purposes, huge expenses that far exceed their actual cost. This is a strategy that has been leveraged effectively by virtually every tech giant in the last decade, from Apple to Facebook to Microsoft. Zoom’s success in using stock options to avoid taxes is neither surprising nor (currently) illegal.

Stock options aren’t the entire story behind Zoom’s success in avoiding federal income taxes in 2020. The company appears to have enjoyed tax benefits from accelerated depreciation and research and development tax credits. Notably, the combination of three tax breaks appears to be the recipe that Amazon and Netflix have used with such success to reduce their federal tax bills during the Trump corporate tax era so far.

Zoom’s corporate tax avoidance has helped create a short-term cash bonanza for the company: Zoom ended the fourth quarter of 2020 with $4.2 billion in cash and equivalents. This prompted one analyst on the company’s fourth-quarter earnings call to ask how the company planned to spend it all, to which Zoom’s CFO and CEO responded that while they haven’t yet mapped out a strategy to deploy their newfound mountain of cash, “if any of you have any great advice how to do that” they’d love to hear it.

The good news is that, as President Joe Biden and congressional leaders signal their intention to revisit the question of corporate tax reform, the breathtaking tax avoidance of these three companies gives policymakers a clear path forward for base-broadening tax reform. If lawmakers want to change this, they need only look to their own handiwork in failing to curb tax breaks in the past.