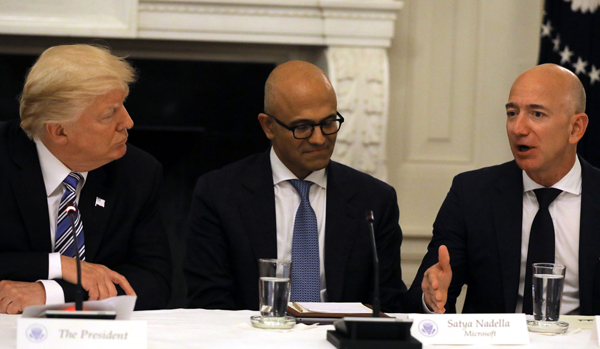 By Carl Davis and Matthew Gardner

President Trump’s latest Twitter target, the Amazon Corporation, is now under the microscope for its state and local tax avoidance. In a Thursday tweet, the President claimed that “[u]nlike others, they pay little or no taxes to state & local governments.” Such a statement is a startling reversal for a president who previously said his own ability to avoid paying income taxes “makes me smart.”

The 4:57 a.m. tweet didn’t clarify which state taxes he was referring to, but later in the day Deputy Press Secretary Lindsay Walters explained that he was criticizing Amazon’s practice of not collecting state and local sales taxes on purchases made through the company’s large and growing “marketplace” business, where it partners with third-party sellers. This assertion has some merit. With some difficulty, Washington and Pennsylvania finally succeeded in spurring Amazon to collect tax on those sales this year, but the company rarely does so in 43 other states with state sales taxes, and Amazon is waging a legal battle in South Carolina to avoid doing so. Amazon has all the information it needs to collect and remit these sales taxes right now, but is dragging its feet, allowing it to maintain a tax-driven price advantage over local businesses.

This is far from the only evidence of Amazon’s tax-avoiding tendencies. ITEP has recently criticized Amazon for avoiding all federal income taxes on its U.S. profits in 2017, and earlier this week an ITEP report documented how Amazon still does not need to collect many local sales taxes—though in fairness, the latter is not always the company’s fault.

On top of that, it’s worth remembering that Amazon established its current retail dominance in large part by finding ways to sell products without collecting any state or local sales taxes at all. The legal requirement that companies don’t have to collect sales taxes in a state unless they have a “physical presence” there gave Amazon carte blanche to ignore state and local taxes for many years. After decades of delay, court battles, and aggressive avoidance, Amazon now collects state sales taxes in every state that levies one, but only because the company’s exponential growth has meant it needs to have a physical presence in most states to fulfill customers’ orders.

It’s understandable that local communities not lucky enough to land an Amazon distribution center would be less than thrilled by Amazon’s growth, which has taken business away from local retailers and cut significantly into the property and income tax revenue generated by businesses with a meaningful local presence.

A pending Supreme Court case could slam the door shut on Internet sales tax avoidance by both Amazon and e-commerce retailers more broadly. And to its credit, the Trump Administration has voiced support for granting expanded tax collection authority to states and localities.

On the other hand, it’s ironic that a tax-averse president would criticize a company for avoiding taxes, and it’s equally odd that he would castigate a company that has just received hundreds of millions of dollars in federal tax breaks as a result of the president’s own tax plan. The new tax law gives Amazon a special low tax rate on its $2.8 billion of possibly-untaxed offshore profits. And the tax law’s reduction of the corporate tax rate from 35 to 21 percent could net Amazon close to a billion dollars a year in tax reductions going forward at current profit levels. Forcing Amazon to collect sales tax on all of its customers’ purchases would be a good start. But if the president truly wanted Jeff Bezos’ company to pay its fair share, the best starting point might be to undo the giant corporate tax cut he recently championed.