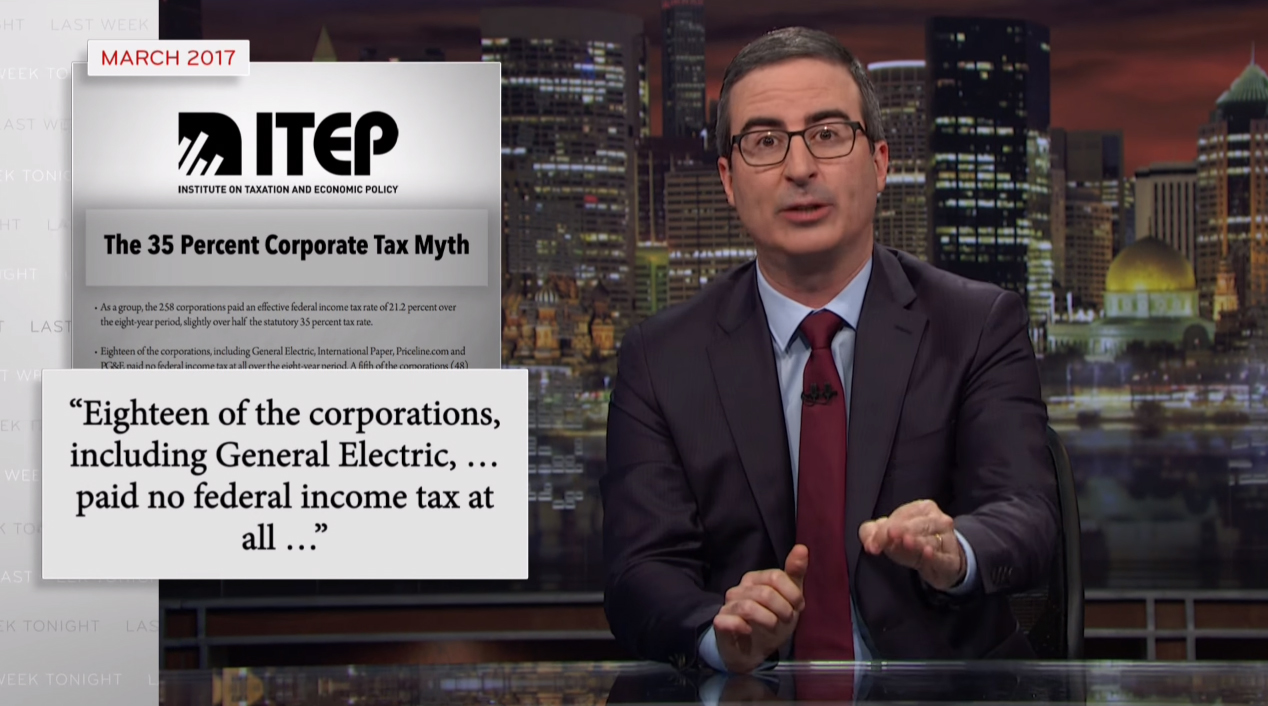 The HBO television show Last Week Tonight with John Oliver has become known for its longer segments that examine important issues facing the country. In its latest segment on Sunday, the show took a deep dive into corporate taxes and how many companies manage to avoid paying their fair share. Between its hilarious interludes, the segment painted a striking portrait of problems in our corporate tax code and how the Tax Cuts and Jobs Act (TCJA) failed to address them. Here are some key points.

1. Corporations are one of the biggest beneficiaries of the TCJA.

Oliver’s segment highlights the fact that the core of the new tax law is a massive tax cut for corporations. In fact, just over half the law’s benefits are directed solely to corporations. And the GOP made the bulk of the corporate income tax changes permanent, while virtually all of the personal income tax cuts expire after 2025.

2. Many corporations have paid little or nothing in income taxes for years.

Another key point in the segment was that loopholes and tax breaks in the code allowed companies to pay substantially below the previous statutory corporate tax rate of 35 percent. In fact, an ITEP study from 2017 found that the average federal tax rate among profitable Fortune 500 companies was 21.2 percent from 2008-2015. Oliver cited this same report to note that 18 profitable Fortune 500 companies, including General Electric, paid no federal income taxes over the entire eight-year period. In a more recent report, ITEP found that 15 Fortune 500 companies paid no federal income taxes on $24.5 billion in profits in 2017.

One of the most important ways that companies avoid taxes is by shifting their profits into tax haven subsidiaries. The Last Week Tonight segment did not shy away from digging into the details of different tax avoidance schemes that large multinationals pursue. An accounting gimmick highlighted by the segment is the “Double Irish with a Dutch Sandwich,” which Google famously used to avoid paying taxes on its offshore earnings. The scope of the tax haven problem is most starkly revealed by the fact that U.S. multinationals report 59 percent of their offshore profits in the 10 most infamous tax haven countries.

4. Repatriation was a major windfall, not a punishment for corporations.

In the segment, Oliver rightly called out the misconception that the TCJA punished companies for stashing their money offshore. While the law does require companies to pay taxes on their accumulated offshore earnings, they get to do so at a discounted rate of 8 or 15.5 percent, rather than the 35 percent they previously owed. ITEP estimates that this is a $413 billion windfall for the Fortune 500 companies that held $2.6 trillion offshore to avoid taxes. The segment also noted that the previous tax break on repatriation went largely to shareholders, rather than to job creation or workers.

5. The TCJA was a missed opportunity for real tax reform.

As Oliver poignantly noted toward the end of the segment, “There are legitimate debates over how and how much we should tax corporate profits, but we just had a huge chance to reform our tax code and we absolutely blew it. Because effective tax reform is not just about lowering rates, it’s about closing loopholes.” Rather than closing the loopholes in the corporate tax code, the TCJA made a lot of the problems worse. One notable example of this that Oliver notes in the segment is that the TCJA would make offshore tax avoidance worse rather than better by leaving out a robust per country minimum tax and other measures to crack down on these behaviors.