The federal Tax Cuts and Jobs Act of 2017 (TCJA) created many lucrative tax cuts for high-income taxpayers that purportedly “trickle down” to lower- and middle-income families, including the new Opportunity Zones program (OZ). Under the Opportunity Zones program, people who invest in areas designated as “distressed” are rewarded with various federal tax breaks on the income they enjoy from those investments. Due to linkages between the federal and many states’ tax codes, the same tax breaks are now available in most states. 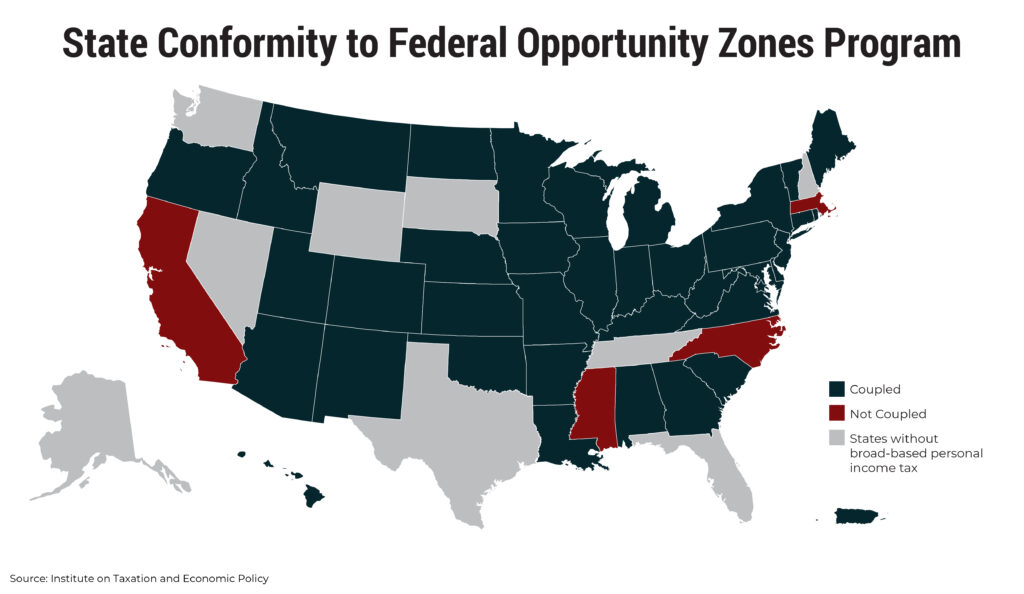 There is little reason to believe that opportunity zones will deliver meaningful economic benefits to the low-income families they are ostensibly designed to benefit. Not only are opportunity zones based on failed trickle-down economics, but investors are incentivized to fund highly-profitable projects rather than projects more responsive to the needs of truly distressed communities, such as affordable housing. Additionally, regulations for opportunity zones are inadequate to hold investors accountable for making investments that actually benefit local communities (For more information on the federal Opportunity Zones program and its shortcomings, see Opportunity Zones Bolster Investors’ Bottom Lines Rather than Economic or Racial Equity.)

Post enactment of TCJA, lawmakers in most states still need to decide how to respond to the creation of this new program. Given the shortcomings of the federal Opportunity Zones program and its added potential costs to states, the most prudent course of action is three-pronged:

An additional issue for states to be concerned about is the regressive nature of these tax incentives. The majority of state tax systems are already regressive, taxing lower-income households at higher rates as a share of their incomes. Opportunity zones would exacerbate this issue by shrinking the tax base and as a result either shifting the responsibility for those taxes onto those already paying a higher share of their incomes or depleting resources for public investments that are responsive to the needs of these same taxpayers.

In addition to subsidizing out of state investors and exacerbating regressive tax subsidies, each of these three subsidies threatens state finances in different ways.

The first of these subsidies has already drained untold millions in revenue from state coffers since January 1, 2018.[2] Rather than waiting until 2026 to tax these gains, states should enact legislation stipulating that these sales will be taxed as if the realization event occurred during the tax year in which the legislation is enacted. Doing so could provide a near-immediate revenue boost when most states are negotiating their budgets next spring. This corrective action is made even more important by the fact that states are already losing revenue from current federal capital gains breaks such as deferrals for like-kind exchanges (i.e., reinvesting capital gains in similar properties).[3]

The second subsidy is problematic because it excludes a portion of capital gains from taxation entirely. To prevent this second subsidy from eating into their collections, states should clarify that portions of capital gains from investments kept in an Opportunity Zone funds will not be excluded from state taxation (as they are at the federal) and will not receive a step-up in basis (a rule that would otherwise exempt investments from taxation at death).

The most important of the subsidies for states to decouple from is the third subsidy—the complete tax exemption for any gains generated by Opportunity Zone funds. Unless state lawmakers act, high-income investors will not pay a dime in state tax on their investments in luxury hotels, high-end condos, and other lucrative Opportunity Zone investments—including in areas undergoing rapid gentrification. While this provision will not begin to siphon off state revenues until 2028, it has the potential to be much more costly than either of the other two breaks since it is a complete exemption rather than a deferral or partial exemption; as such, it is in the interests of states to decouple from this subsidy now alongside the more time-pressing subsidies described above.

To prevent draining state resources, subsidizing out of state investors, and exacerbating the regressivity of their tax codes, state lawmakers should follow the lead of California, Mississippi, North Carolina, and Massachusetts[4] and pass legislation that rejects conformity to these federal Opportunity Zones subsidies. Although no two states conform to the federal code in exactly the same way, rejecting conformity to Opportunity Zones subsidies would be straightforward for all states to do: [5]

Like conformity to the federal Opportunity Zones subsidies, these additional state subsidies limit the revenue available to states or localities and have been shown to have little or no effect on where investors actually decide to make investments.[7] Making matters worse, in the unlikely event that these subsidies do spur economic growth, their cost makes it more difficult for governments to fund the additional expenditures needed to meet the increased demand for public services that come with economic expansion.[8]

Five states have enacted investment tax credits that further subsidize opportunity zones. For example, Ohio will reimburse investors for 10 percent of their investments in an Opportunity Zones fund (up to $1 million per year). The state intends to spend up to $25 million per year reimbursing investors. The Connecticut credit, by contrast, is significantly narrower as it focuses on the rehabilitation of historic structures.

Although opportunity zones already provide lucrative tax breaks against both federal and state capital gains taxes, states such as Rhode Island have enacted state capital gains tax breaks that go beyond those inherited from their linkages to federal tax law. In Rhode Island, the exemption can be used by any taxpayer keeping their investment in an opportunity zone fund for seven years or more (as opposed to 10 years at the federal level).[9]

As with the federal subsidies, these tax breaks will provide the largest subsidies to those taxpayers reaping large profits on their opportunity zone investments and as such, incentivize abuse of the program by and for wealthy investors.  For example, opportunity zone lines were redrawn in Florida to include the “Superyacht Marina” of billionaire investors[10] and lines were redrawn in Michigan to include real estate properties of NBA owner Dan Gilbert.[11]

Louisiana and Maryland have both enacted property tax reduction programs for opportunity zones within their states. While business tax incentives for economic development in general have proven to be ineffective,[12] property tax abatements have been shown to be even more problematic. A study by the Lincoln Institute of Land Policy found property tax incentives to be ineffective since companies do not choose new locations based on property taxes but on access to a workforce and proximity to markets.[13] More so, these incentives deplete a community’s tax base, depriving funding for local schools, police and fire protection, and street and bridge maintenance.

Maryland’s program allows local governments to offer such reductions if they choose. This creates the potential for counterproductive intrastate competition, whereby various localities within the state’s borders may find themselves competing with each other to offer the largest subsidy. To the extent that this occurs, there will be no net gain to the state of Maryland from this behavior.

Louisiana’s program allows opportunity zones to qualify for property tax abatements in addition to expanding, restoring or improving properties. In its analysis of Louisiana’s property tax freeze program, the state’s legislative fiscal office rightly suggests that it could lead to higher property taxes for individuals and businesses not benefiting from the freeze.[14]

Although only two states have enacted legislation directly related to property taxes within opportunity zones, many opportunity zone investors are likely to reap additional benefits through other preexisting property tax breaks such as TIFs (tax increment financing), which real estate developers can use to abate property taxes.

The premise of opportunity zones is that the economic benefits from tax cuts to investors somehow trickle down to benefit low-income households in the future. However, the most tangible outcomes tax giveaways to opportunity zones offer these households are increasing gaps in state budgets and the priorities they fund, higher taxes, and a growing racial wealth divide.

States should invest in economically distressed areas, but the method of offering tax incentives through opportunity zones will not improve economic equality and promote racial equity (see Opportunity Zones Bolster Investors’ Bottom Lines Rather than Economic or Racial Equity).

Rather than depend on these flawed programs for economic development, states should instead take fiscal actions that promote growth in the economy while being conscious of racial equity and economic quality, such as making direct investments in schools and infrastructure. Investing in smaller class sizes and improving access to quality education can boost productivity in the economy.[16] Inequalities that result from relying on local property taxes to fund education can be ameliorated through additional state aid for lower-income communities. Investing in restoring infrastructure, such as improving roads, water and sewage systems, can benefit state economies by spurring jobs while increasing economic quality in the long-run. Furthermore, investing in public transit promotes equity by connecting economically disadvantaged communities to more job opportunities. Furthermore, states that are truly interested in aiding “distressed” communities should have their investment strategies informed by engagement with affected stakeholders, consulting with community leaders and activists in local neighborhoods to inform what investments would most benefit their communities.

By supporting public goods through sound tax policy—raising adequate and sustainable revenue in a progressive manner—state and local governments can help improve local economies by investing in communities that suffer from food deserts, a lack of public schools, and sustainable jobs while priming the ground for private investment in the future.

The federal Opportunity Zones program is deeply flawed. States should decouple from this program as quickly as possible and decline to double-down on its failed trickle-down approach by rejecting proposals to enact additional tax credits for investors of opportunity zones. If states do not decouple, they run the risk of lost revenues as well as larger inequities in the future. Lawmakers who want to invest in distressed communities should seek to make those investments directly rather than through the flawed structure of the Opportunity Zones program.

The time for state lawmakers to act is now. It was recently reported that the 2020 Census could expand Opportunity Zones tax breaks.[17] Recently, Rep. Rashida Tlaib proposed a bill to repeal the Opportunity Zones tax break in its entirety. If enacted, this would be a step in the right direction towards a just tax system However, states should not wait to enact their own responsible and equitable economic tax policies.

[5] Grundman, Dylan. “What the Tax Cuts and Jobs Act Means for States- A Guide to Impacts and Options,” Institute on Taxation and Economic Policy, January 26, 2018, Available at: https://itep.org/what-the-tax-cuts-and-jobs-act-means-for-states-a-guide-to-impacts-and-options/

[14] Specifically, the office writes that “Assuming some of this property development would occur anyway, local property tax growth would be diminished somewhat during the periods of frozen assessment. To the degree millage adjustments occur, however, the aggregate level of local property tax collections may not be affected so much as the distribution of those taxes across property owners.” Louisiana Legislative Fiscal Office. Fiscal Note for HB585 as Enrolled. June 1, 2019. Available at: https://legiscan.com/LA/supplement/HB585/id/110065.

[15] Levin, Jonathan and Michael Deibert, “Puerto Rico May Shift Some Aid to Opportunity Zone Projects,” Bloomberg. May 14, 2019. Available at https://www.bloomberg.com/news/articles/2019-05-14/puerto-rico-may-shift-some-u-s-aid-in-opportunity-zone-projects.