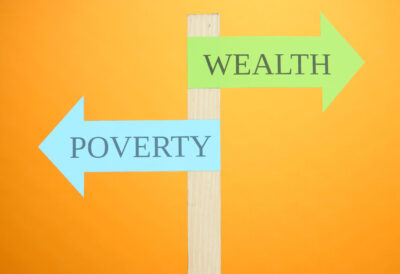 We are surrounded by evidence that economic inequality is spinning out of control, yet we also see straightforward examples of how governments can stop the downward spiral should they choose to do so. The Build Back Better Act, which invests in communities and ensures the wealthy and corporations pay their fair share, is one such example.

As COVID-19 slowed or halted economic activity in 2020, the global rich got richer while 100 million people sank into extreme poverty, a recent study by the World Inequality Lab found. In fact, billionaires around the world saw the steepest increase in their share of the world’s wealth on record.

Wealthier countries fared better overall with fewer people falling into poverty. This was due to substantial government investment that aided businesses and provided people with direct payments to keep them afloat, the report found.

This tracks with findings from U.S. Census data and other research about poverty and inequality in the United States. Federal lawmakers provided an infusion of government spending during the most acute phase of the pandemic via the $2.2 trillion CARES Act. Government intervention prevented millions of foreclosures or evictions and alleviated poverty by providing direct cash payments to individuals and dependents, a $600 weekly boost in benefits to unemployed workers, temporary paid sick leave and other interventions.

The Census’s Supplemental Poverty Measure, which factors in government assistance, found that poverty fell from 11.8 percent to 9.1 percent in 2020 despite the severe economic downturn and surge in unemployment. Stimulus payments and expanded unemployment insurance together lifted 17 million people out of poverty.

These competing stories from the pandemic economy—further wealth concentration at the top, growth in extreme poverty, and government intervention alleviating poverty–end with the same moral: with political will, advanced economies like the United States can address poverty and inequality.

During the early days of the pandemic, gross inequities in our economy were front and center. Lower-wage workers were more likely to lose their jobs and service workers such as retail clerks and gig economy workers who didn’t lose their jobs put their health at risk every day while higher-income workers began working remotely.

Sure, stock market values precipitously declined in March 2020 (the richest 1 percent own 51 percent of directly held stock), but the stock market quickly and spectacularly rebounded, and U.S. billionaire wealth grew by leaps and bounds. An October report from Inequality.org and Americans for Tax Fairness found that the wealth of American billionaires grew 70 percent from March 2020 to October 2021. Elon Musk’s wealth alone grew 7.5 times over during this span. The nation’s 745 American billionaires own substantially more wealth than the bottom 50 percent of Americans, some of whom worked in their factories and warehouses or delivered their goods throughout the pandemic.

Trickle-down economic policies are partly the reason for this gross economic divide. For more than 40 years, public policies have favored capital accumulation over labor. Tax policies have shifted further and further to advantage the wealthy. The top marginal tax rate fell from above 90 percent in the 1950s and 1960s to 37 percent today, for example. Tax laws enable the rich to pass their wealth from one generation to the next tax-free. A coordinated attack on workers’ rights has decimated employees’ ability to collectively bargain for better wages. Union membership rates hovered in the 20s during the 1970s. Now just one in 10 American workers are union members.

So here we are, near the end of year two of the COVID-19 pandemic. When it began, advocates and some politicians recognized that solely addressing the acute stage of the crisis would be tantamount to using gum to plug a leaking pipe. Millions of people faced eviction, food scarcity and other poverty-related challenges in the immediate aftermath of the pandemic because they were on precarious financial footing in the first place.

When President Biden took office, his administration committed to a recovery aimed at the lower- and middle-income families who had sacrificed the most through 2020. His American Rescue Plan Act provided direct payments of $1,400 to households and temporarily extended expanded unemployment benefits. The measure also expanded the Child Tax Credit (CTC) and Earned Income Tax Credit (EITC) for 2021.

Now the White House and Congress are trying to go even further by investing in everyday people and tackling extreme inequality. The Build Back Better Act (BBBA) would further extend the CTC and EITC expansions through 2022 and permanently make the CTC fully refundable, allowing the poorest households to make full use of the credit. ITEP estimates that 90 percent of children would benefit from the continued CTC expansion, and that one in three households overall would benefit from either of these provisions. The 2021 CTC expansion is particularly impactful as the benefit is nearly universal for households with children, many of whom received the credit as a monthly payment. The poorest 20 percent of families, who received no credit or a partial credit under previous policy, had a 35 percent income boost this year thanks to the CTC expansion. If Congress doesn’t act, millions of families will lose the benefits of these provisions. The last CTC payment is this month.

Passing Build Back Better would also address widening economic inequality by ensuring that the ultrawealthy and multi-national corporations pay their fair share. The measure includes a millionaires surtax, which would apply an additional 5 percent tax rate to income over $10 million and a further 3 percent to income over $25 million, effectively bringing the top marginal tax rate for the ultrawealthy up to 45 percent. Another proposal promoted by Sen. Finance Chair Wyden is a Billionaires’ Income Tax that would prevent people like Elon Musk and Jeff Bezos from deferring taxes on their enormous earnings year after year.

Of course, many progressive revenue-raising provisions were dropped from the bill at the insistence of lobbyists and a handful of Democratic lawmakers. It appears highly unlikely that a higher corporate tax rate, fixes to the preferential treatment of capital gains, or higher estate taxes on the wealthy will end up in the final version of the bill.

The pandemic has made it clear that government action works, and that poverty and inequality are policy choices. So far, the Biden administration and razor-thin Democratic majority have shown a commitment to addressing the structural imbalances in our economy. One Democratic lawmaker has said he cannot support the measure in spite of the immense benefits to people in his state. Zero Republican lawmakers support the bill despite their dubious attempts to paint themselves as the party of working people.

The ongoing debate over Build Back Better and the continual watering down or elimination of many provisions that would have the wealthy pay more in taxes reveals an entrenched policy apparatus that reflexively prioritizes those who need it least. The bill presents an opportunity begin dismantling structural inequities and starts to address extreme inequality in a meaningful way.