ICYMI: A Brief Summary of Our August Blogs and Reports

GOP leaders continue to misrepresent who benefits from the 2017 Trump-GOP tax law, most recently claiming most “of the tax overhaul went into the pockets of working families and Main Street businesses who need it most, not Wall Street.” But the numbers prove otherwise. New ITEP analysis shows most of the benefits of the Tax Cuts and Jobs Act continue to flow to the wealthy—in fact, the richest 20 percent of taxpayers will receive 72 percent of the benefits in 2020.
⁠—STEVE WAMHOFF 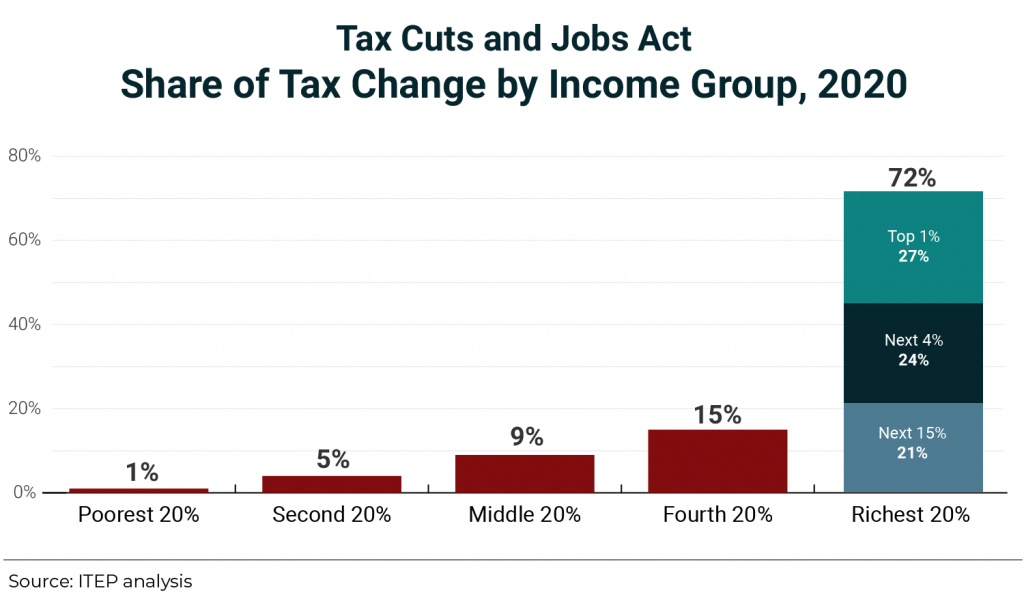 ONE TAX SYSTEM FOR THE RICH, ANOTHER FOR EVERYONE ELSE

Last year, the Walton family’s fortune grew by $100 million a day. This level of wealth is particularly obscene in the context of the Walmart Corporation’s dark store strategy. This blog outlines how corporations use their influence and other resources to avoid paying their fair share of taxes.
—MATTHEW GARDNER

STATE AND LOCAL CANNABIS TAX REVENUE ON PACE FOR $1.6 BILLION IN 2019

A new ITEP analysis estimates that excise and sales tax revenues from cannabis sales could reach $1.6 billion in 2019. This would represent a 15 percent jump from revenue states collected in 2018⁠—a record-setting year.
—CARL DAVIS

New tax data out of California, the world’s largest market for legal cannabis, illustrate the role local market conditions play in raising state revenue. The Golden State’s lackluster performance in the second quarter has more to do with state policy and a large illicit market than higher-than-average taxes.
—CARL DAVIS

The Business Roundtable released a revised “statement on the purpose of a corporation” with a newly declared intent to support communities and all stakeholders, not only shareholders. The words tax, deficit and government don’t appear in the statement. On the bright side, it doesn’t explicitly use the words oligarchy or overlords either.
— MATTHEW GARDNER

OPPORTUNITY ZONES HAVE NOTHING TO DO WITH REPARATIONS, EXCEPT…

Among other things, this blog highlights how federal, state and local policies systematically work to reinforce the racial wealth gap by, for example, using the tax code to redistribute the nation’s wealth to billionaire developers and keeping low-income people of color in a perpetual cycle of debt through fines and fees to fund local governments. Opportunity zones and the top-heavy 2017 tax law are emblematic of a long history of policymaking that advantages wealthy white families.
—JENICE ROBINSON

During the debate leading up to the passage of the 2017 Trump-GOP tax law, some voiced concerns that its provisions limiting the reach and generosity of the mortgage interest deduction could cool the housing market. But new evidence confirming that these worries were overblown should embolden policymakers to permanently eliminate the deduction—especially since now more than ever, it’s another tax break that primarily benefits the highest-income households.
— JESSICA SCHIEDER

A group of U.S. senators and representatives have sponsored legislation to repeal the 2017 tax law’s $10,000 cap on state and local tax (SALT) deductions. Problem is, the vast majority of the benefits of repeal would go to the wealthiest taxpayers.
— CARL DAVIS

A longstanding problem with the nation’s tax code is that it taxes offshore profits of American corporations more lightly than it taxes their domestic profits. Here’s how that could change.
— STEVE WAMHOFF

WHAT YOU NEED TO KNOW ABOUT A PAYROLL TAX CUT

The Trump Administration considered cutting the Social Security payroll tax to prevent an economic downturn, something that seemed more justified when enacted in the aftermath of the Great Recession—when congressional Republicans largely opposed it. While the idea was tabled for now, this blog outlines what you need to know if a payroll tax cut is served up again.
— STEVE WAMHOFF

Earlier this month, Alan Essig, ITEP’s executive director announced he will be leaving the organization in December 2019. Read his and the ITEP and CTJ board chairs’ statements here.