ICYMI: A Brief Summary of Our June Blogs and Reports

Lawmakers are reluctant to embrace tax increases despite majority support, including a recent finding that 60 percent of millionaires back the idea. Even 51 percent of Republicans polled supported a wealth tax, according to a February poll by Politico.
– STEVE WAMHOFF 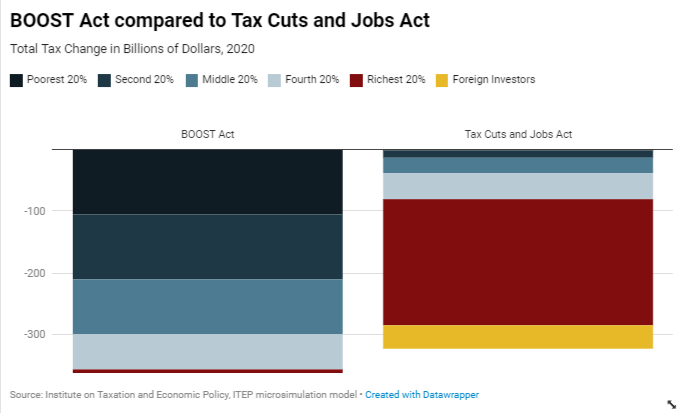 New ITEP analyses examine two proposals released this month, including state-by-state data and national impacts. The Economic Mobility Act of 2019 introduced by Rep. Richard Neal aims to expand key tax credits for low- and moderate-income people, while the BOOST Act released by Rep. Rashida Tlaib would extend help to millions who would receive no benefit from other major tax credit proposals.
– STEVE WAMHOFF

RELATED: ITEP’s Meg Wiehe and Jessica Schieder joined Vox’s The Weeds podcast and Jonathan Tasini’s Working Life Podcast, respectively, earlier this month to unpack how tax credit proposals could reverse some of the damage from the 2017 Tax Cuts and Jobs Act.

WHAT TO WATCH FOR ON TAX POLICY IN UPCOMING PRESIDENTIAL DEBATES

The Democratic presidential primary debates this week present an opportunity for candidates to make clear how they will help build an economy that works for everyone.

VIDEO: ITEP tax wonks weighed in on what they want to hear this week.

Travelers in 12 states will pay more in gas taxes beginning Monday. The reasons for these increases vary, but they’re generally intended to fund maintenance and improvement of our nation’s transportation infrastructure.

Also this month, a House Ways and Means subcommittee held a hearing on concerns that the SALT cap is harming the ability to collect state and local revenue. Though overstated, these claims may eventually become a self-fulfilling prophecy if lawmakers tie their own hands by failing to pursue tax policies that ensure programs and services are adequately funded.

THE RICH MAY BE RICHER THAN WE THINK

A new report further shedding light on the wealthy people’s ability to hide their assets and avoid taxes has us asking whether nation’s economic inequality problem may be more pronounced than current data show.

ITEP has an opening for a Senior Software Engineer (Full Stack) to join our creative, passionate and productive staff as Lead Tax Model Platform Developer. For details and to apply, view the full job description.